THE EFFECT OF PHYSICAL ACTIVITY ON YOUR BRAIN STRUCTURE

Whilst many people are aware that regular physical activity can change the structure of our bodies, most obviously through reducing fat stores or increasing muscle mass, fewer are conscious of the profound effect it can also have on the structure of our brains. Current evidence indicates that both the protection and preservation of our brain health and function are influenced by our activity, with some experts suggesting that our brain may depend on this frequent movement to function optimally throughout our lifetime.

The reduction in brain volume can lead to significant decline in cognitive function, and an abundance of research suggests that physical activity can prevent this from occurring as we age. Not only has activity been shown to prevent the loss of total brain volume, but also helps to retain the volume of specific brain regions such as the hippocampus – an area essential for learning and memory.

It’s currently thought that the positive link between physical activity and the protein brain-derived neurotrophic factor (BDNF) can, in part, explain this. BDNF is a crucial component of a healthy brain, assisting in brain plasticity and function in both young adults and older populations. Alongside this, the protein has links to neurogenesis, the brain’s ability to modify its structure throughout adulthood by developing new neurons, which may ultimately protect your memory in the long term, and it has been suggested that activity as accessible as regular walking can elicit this beneficial BDNF response. As a result, physical activity continues to be actively investigated as a potential therapy for common neurological and psychiatric disorders, including depression, Parkinson’s and Alzheimer’s.

A growing body of research also highlights the important role physical activity plays in immune function, reducing inflammation in crucial organs such as the brain. Lowering the levels of inflammation in the brain can help to reduce the risk of developing neurodegenerative diseases, such as Alzheimer’s. Presently, this is thought to be due to the effect of physical activity on microglia – the primary immune cells of the brain.

Microglia’s principle function is to check the brain for threats and rid it of any damage found. However, microglia become less efficient as we age, and therefore becomes less effective in preventing disease and inflammation, ultimately leading to impaired brain function. Recent research by Mela and colleagues suggests that undertaking sufficient physical activity can re-programme the microglia, ensuring they become more energy efficient and remain capable of counteracting the inflammatory changes that impair brain function. Prior research has also concluded that physical activity can also be useful in disease prevention and targeted treatment of degenerative conditions like Alzheimer’s and multiple sclerosis.

It is clear that physical activity remains a crucial component in both the treatment and prevention of cognitive decline, as well as retention of overall brain health. Although the evidence for this is not presently robust enough to develop specific guidelines in relation to brain health, current findings point to aerobic exercise, strength and flexibility activities as being most beneficial. With its benefits spanning many aspects of your health, it’s important to be conscious of your activity levels and keep moving throughout your day – providing a boost for both your body and your brain! 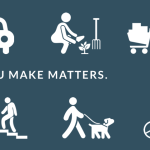